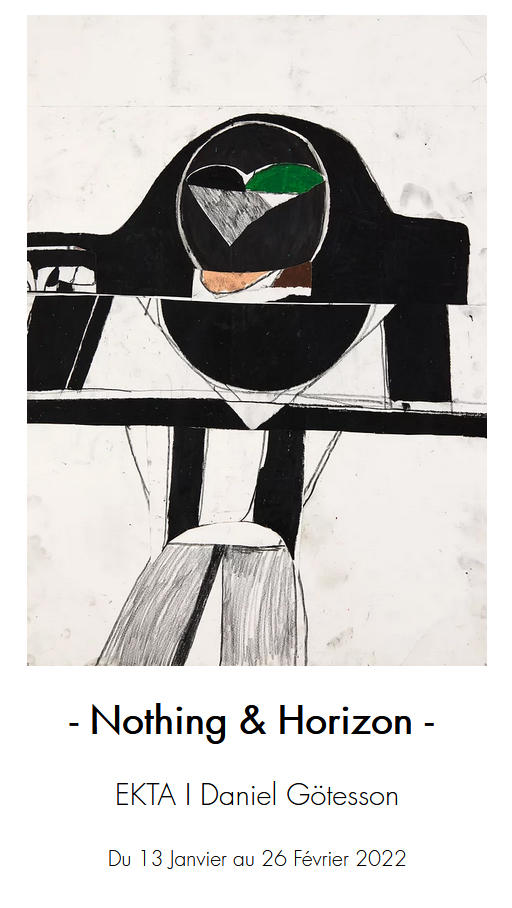 “In the early 1970s the publisher Sandoz released a series of folios called Psychopathology and pictorial expression. It is a series of psychiatric case studies exploring art and the mind, and each issue is beautifully illustrated by images of the patients work. The publications have captivating titles such as “Countess of suburbia”, “Masks and neophormisms in a psychotic girl” and my personal favourite: “Unusual materials in the work of schizophrenics”. What are USUAL materials in the work of schizophrenics?

Both Daniel and I are fascinated by the raw honesty and iconic intensity of psychiatric art, so when he presented me with the works for this show I approached them as if it was a publication in the series of Sandoz case studies. What would his issue be called? Nothing & horizon seems like a great title for his case. Daniel is an elegant trickster, his raw expressiveness appear straight-forward like archaic symbols with a coded language. Many of the works he presents you, the french audience, appear to me like stylish yet neurotic dancers in a club with an existential soundtrack. They are naughty, flirty, enigmatic and so very chic in all their awkwardness.

I asked him for a list of things currently on his mind. In response I recieved a series of messages that would be wonderful material my Ekta-version of the Sandoz publication. Simply asking what I should call him in this text – Daniel Götesson or Ekta – gives a dualistic non-answer (whatever I prefer apparently). But some key elements in his response I found especially enlightening: His thoughts on navigating emptiness by means of trickery, of loosing interest when friction is solved and actively avoiding being un-riddled and explained. “I am more interested in creating problems than solving them”, american artist Jason Rhoades once said and it seems our Ekta moves to the same music as Rhoades. It is as if the smoke machine and flickering lights of Daniels mind has filled the dance floor with his works, bumping around in a wonderful riddle of disjointed moves. But don´t be afraid, put your helmets on and get up and dance. ”